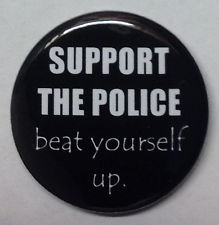 In the early 90s I wore the above button on a daily basis. It was post Rodney King LA riots, I was 20 years old, and still in college. To say my give-a-shitter was broken would be an understatement. I was in the prime of my “who give a *UCK” days.

On my way to work one morning I boarded an elevator in my building. Two police officers got on behind me. One of them saw this button on my jacket. He looked at me and said, “Nice button.” I looked at him, down at the button, then back at him and responded, “I know right?” The three of us continued the ride up in silence. When they got off on the 25th floor I told them, “Have a great day!” They responded, “You too.”

You could say my balls hang low. You could say I was stupid. You also could say that this type of not giving a shit runs strong in my family. My physician grandfather got nothing but respect from white clerks when he walked into segregated shops in Norfolk,Virginia during the 1940s and 50s. He and my mother would enter through the FRONT DOOR to do the needed annual back to school shopping. Treat him right and he would by the store out. Don’t respect his title and his cash and it was your loss. He got very little guff.

My great great (too many greats) ancestors who attempted to escape from slavery had balls as well. When their escape was foiled and they were captured, the youngest two were to be sold as sex slaves. They were left in a cage on a dock awaiting transport when someone from the passing crowd asked the girls if they were ashamed for what they had done. The youngest of the two, Emily, replied proudly that she would do exactly the same thing again. Did I mention that she was 13?

We as a nation have some current issues that are race based and boiling hot. I am no longer a young 20-something. I am the mother of a young black son and the wife of a man some have guessed was Middle-Eastern (he is half white/half black).  I know that there are some people out there that see them as less than because of the color of their skin. I have battled with my self this week over the things that are happening in Ferguson as well as other incidences that have happened all over our country for many years. Loss of life and wrongful arrests of people of all races by officers of the law.

Questions arise…Do I pass that button on to my child? Do I hope that he has inherited the balls of his ancestors? Or do I just pick up and move to another country like Finland where these are the troubles of a far away land?

We shall see what tomorrow brings; but I know I will face it with big balls!