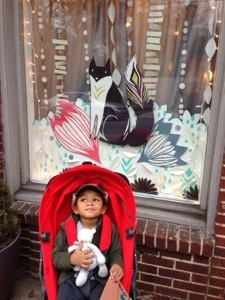 The weather in Atlanta has been less than perfect this holiday season. It’s been colder and wetter than Rudolph’s nose. That still doesn’t stop the fact that holiday gifts must be purchased, and with a husband who flies for work and a three year old always by my side; it is no easy feat. I love online shopping; but there is something magical about the crowds and the beautiful shop windows.   It was going to be a great weekend of shopping. The weather however had other plans.

Friday –
I was filled with weekend optimism so it was no problem. ICE Atlanta was having a holiday pop-up shop in Candler Park. I picked the boy up from school and we headed over. It was cloudy and cold; but he was in a great mood and the building it was in was so cute.

And the magical windows. . . Check! 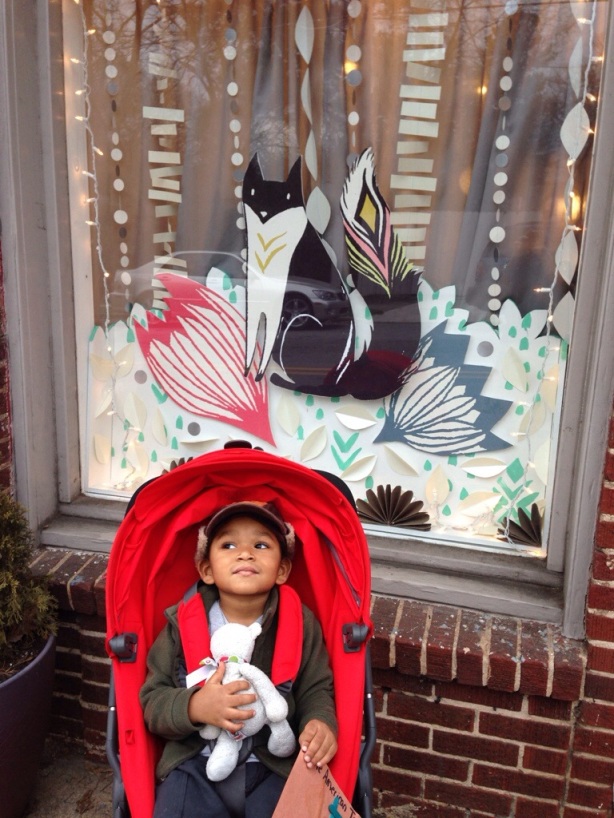 We had a great time but didn’t HAVE to have anything this year. We called it a day.

Saturday –
The rain was falling; but we braved the elements to go to the Decatur Square to visit Cooks Warehouse. A cooking class had just begun and the store was full of shoppers, the stroller made it around every tight corner and display. Aaron never asked to get out his stroller and I found what I was looking for in less than two minutes. Christmas miracles.

I counted my blessings, and the multiplying raindrops and decided to head home.

Being an angel in Cook’s Warehouse

Sunday-
The kid loves his grandmas. Tall Grandma (he differentiates the two grandmothers by noting their stature) was on a mission for winter hats. Unfortunately, after standing in horrid lines in three shops Aaron pulled his own hat down:

We had reached the end of our shopping day as far as Aaron was concerned.

I hope you all have been successful in your shopping. If you have kids in-tow hopefully you didn’t have to depend on bribes and using your cell phone as a distraction too much.