For some it is The Bachelor, American Idol,The Deadliest Catch, Big Brother…etc. For me it is Ice Road Truckers, Dirty Jobs, Rock of Love, The Hills and this season of The Real World. I am a sucker for this, the 20th season, of the show that birthed all reality TV shows. Why do I care if Joey has to go to rehab or Nick’s boss at Movies.com dies of cancer? I don’t know but what I do know is that I was bawling when both of these things happened. I know I need to get a life but really it is just my guilty pleasure. If Amy Winehouse can have her crack I can have my angst-ridden, drunken 20-somethings. 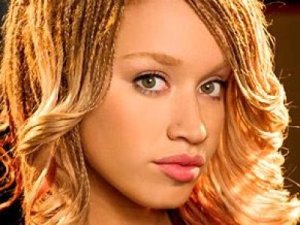 So with that being said, I send showers of praise over one of the Real Worlders….Brianna Taylor. Now this girl came to the house fresh off of the strippers stage and battery charges against her ex but I still liked her immediately. Her failed attempt at American Idol did not squelch her dreams of being a singer and that was what brought her to the fabulous house in Hollywood that MTV built. She wanted it bad but not bad enough to get her butt off of the sofa until roomy Will said, “You have to make it happen for yourself here. Don’t waste this opportunity”. She began writing songs,cutting back on the smokes(a little bit), and singing in front of Manns Chinese Theatre for tips. And the girl can wail too.

As things do in MTV land one thing lead to another and she got to sing with Alex Band(The Calling) at a small nightclub. Next she met and chatted with one of her roomies producer friends who granted her request to help her with her demo. The result is a great song called Summertime. It is great summer, feelgood, chick music and I love it. Go over to iTunes and check it out and the other songs on her EP. And if you like them throw the girl some bucks. Haven’t you ever had a dream?