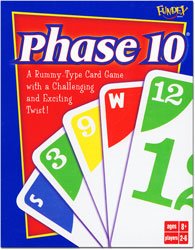 Phase 10 is the greatest card game of all time. I am sure of most of you have never heard of it. However, if you have, please send me a note so that we can organize a game night.
I just found out that there is a Master’s edition of the game that has some twists and turns on the standard rules. I simply do not understand how UNO has done so well and this game is still so low profile.
Here is the Wiki blurb on this beast…
Phase 10 is a card game created in 1982 by Kenneth Johnson and currently produced by Fundex Games. Phase 10 is based on a variant of rummy known as Liverpool Rummy. It requires a special deck or simply 2 regular decks of cards, and can be played by two to six people. The game is named after the ten Phases (or melds) that a player must advance through in order to win. Phase 10 is Fundex‘s best selling product, selling 32,658,845 units to date, making it the 2nd best selling card game, behind Uno.
What they don’t tell you is that a game lasts several hours. I played Friday night and we started at 12 midnight and finished at 4AM. Don’t moan…it’s like many hours at an amusement park.