While the hubs was away this weekend I made a small to-do list for myself. It included painting our main stairway walls and ceiling. Actually one wall and the ceiling as I only had small amount left in the gallon from a previous painting jaunt.

Tapestry Beige! Doesn’t that sound thrilling? It was the color of most of our walls when we bought the place. It is basically Builder’s Beige with a kick but it had that snazzy title on the color swatch card and was the closest match to what was already on the walls. The walls that have seen better days and had quite a few hand marks on them.

The boy is still reluctant to nap at home (sleeps like a champ at school) and I dared to think he could assist me in my home improvement task. Learning an actual skill always trumps sitting in front of the iPad any day, so I figured I would give him a shot as my assistant. As he played in the family room I got out two tarps, a paint tray, paint roller with extension arm, wet wipes for spills, and one of the boy’s small paint brushes.

The tarps went on the floor and up the stairs. I poured most of paint into the tray, blue taped off the trim, and called the boy. He was excited at the idea of helping out and so I laid out the rules. They were simple:

Up the stairs we went. He stayed on the tarp, above the blue tape and on task the entire time. When I needed to move the tarp or get more paint I gave instructions to him one step at a time which kept confusion to a minimum.

Once we made it to the top of the stairs and were on the flat landing I let him finish the job with the paint roller. He was proud to have helped out with such a “big kid” job and notes how nice the wall looks each time he walks down the stairs. Maybe this will keep him from writing on the walls. 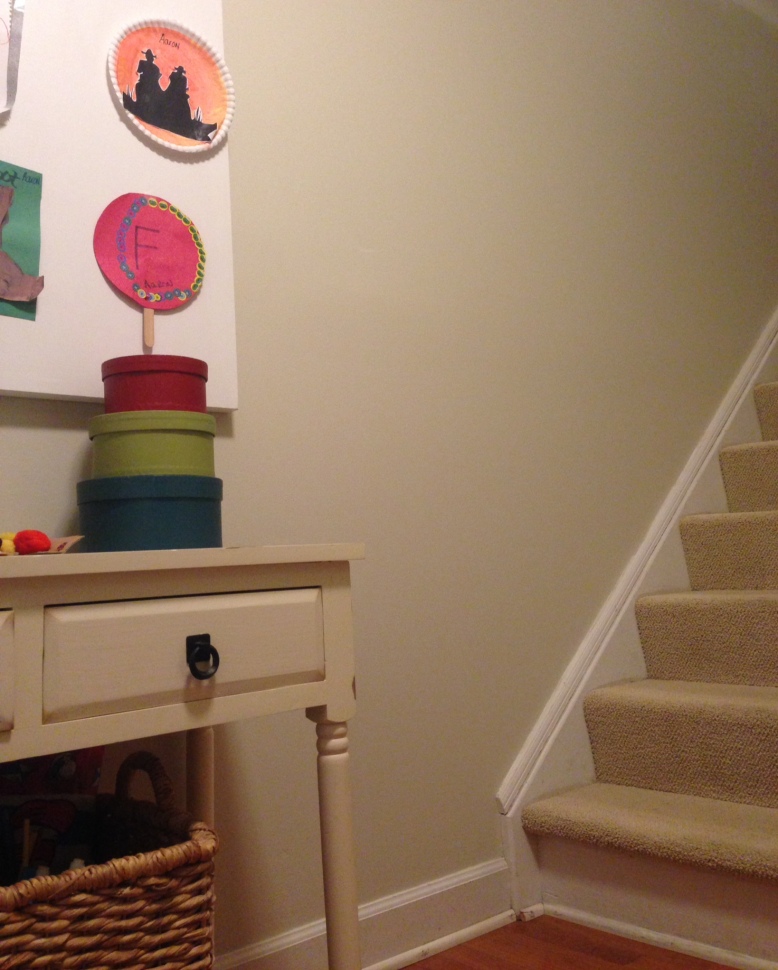 A shot of the finished wall

Maybe this will make him enjoy doing other decorating projects. Maybe I need to look at my list of rules again and remember the boy is just a kid.

Have you successfully involved your kids in any household improvements or decorating?