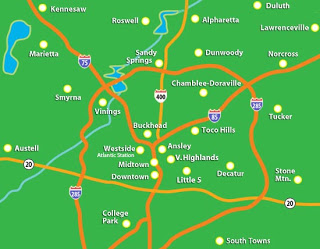 Joe and I are now heading feet first into looking for larger digs. But before we can even lift one finger there are so many things to consider but one thing is obvious. We want to be ITP. That means inside the perimeter for those of you who aren’t living in and around Atlanta. If we aren’t in the city of Atlanta or the city of Decatur then it just won’t do. “Why”, you may ask. The typical Atlanta commute is one filled with much drama and its fair share of foul words. Unfortunately this means we have to juggle schools. Some of the schools your child will have to go to if you live in some in-town neighborhoods are less than desireable. Atlanta Public Schools are in a state of poo anyway without adding insult to injury by sending your little person to a hoodrat/gunshot place of “learning”. Now the schools are the first thing I look at when I see a listing. This is going to be tough! I thought finding a daycare was difficult. It seems there are more doggie daycares than human daycare centers in Midtown. Some intown neighborhoods like Grant Park, East Atlanta, and Cabbage Town have some of the lowest performing high schools in their districts. Living in those communities would mean little man would be going to a private school. Ummmm no. Joe actually said, “It would be so easy if we just sold-out and were willing to live in Newnan!” That is very true. The schools are decent and he found a huge house that was well under our budget. But we aren’t sell-out kind of people so off I go to get boxes to pack all of our clutter in. A clutter free condo is an attractive to buyers condo!