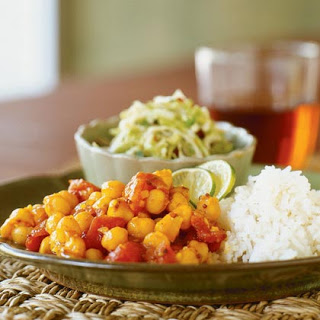 At work, one of my clients brought in a fabulous cookbook by Hans Rueffert. He is a Georgia boy who runs The Woodbridge Inn in Jasper. A finalist on the first season of Next Food Network Star he is at home in the kitchen and grew up loving foods. Two weeks after taping the finale episode Rueffert learned that he had stomach cancer, and the wild ride began. Many treatments and much weightloss later he is back in the kitchen and on the web, cooking and blogging about it.

We often cook things in class that are healthy and easily made in the microwave. When Merry brought the book in I was instantly drawn to the bright colors of all of the natural. healthy dishes he had created. One recipe, Cherry Tomato Curry, looked the easiest and nutritious. I knew that many of the spices would be new to the clients. Cumin, curry, cilantro, and chickpeas, but I had to give it a shot and none of them protested when we went shopping for the ingredients. Rueferrt says it was inspired by one of his favorite restaurants, Vatica in Marietta. I have been there many times and it is worth the trip ITP. The husband and wife who own it cook the food for the day and that is what you eat. No menus, no questions. Awesome vegetarian Indian cuisine that they will gladly replenish at no charge upon request.

After piling all of the ingredients together we stuck it in the microwave. Spicy smells began to waff under our door and outside to the rest of the building. When the buzzer sounded on the microwave to signal it was finished I knew it would be tasty, but what about the clients? Rice was scooped onto plates, the curry, then plain yogurt and finally cilantro. “Try it”, I instructed. One fork full…two… three. SUCCESS! They were actually eating vegetarian Indian food and loving it. This exercise in trying new things opens their minds to worlds of foods and experiences they may have never known. One small leap for me. One large leap for their paletes. I wonder if they would enjoy a trip to Swapna????